The prototype of updated 2016 Buick Encore has been spotted on the road testing, and judging by the first photos, the handsome subcompact crossover from Buick will receive some pretty big changes. The vehicle will feature couple of new exterior details and three new colors, while there are rumors about new engine under the hood and possibly new features inside. 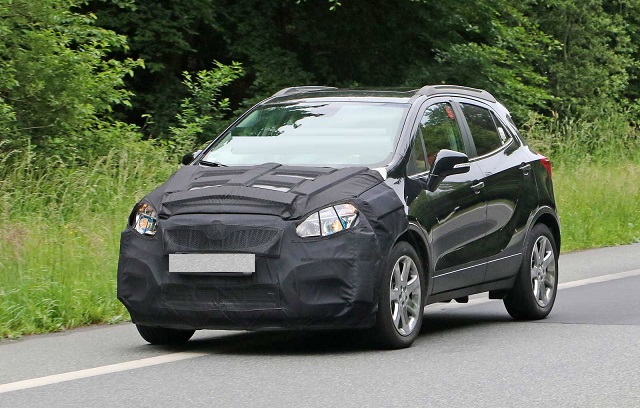 The current Encore offers just a turbocharged 1.4-liter engine with 138 horsepower and 148 lb-ft of torque, and this option will likely stay unchanged with the 2016 Encore. However, the midcycle changes will bring two more options, so the mini SUV will get a new turbocharged 1.0-liter three-cylinder engine, as well as the 1.6-liter turbodiesel unit that will deliver 136 horsepower and 236 lb-ft of torque. All engines will be paired to a six-speed automatic transmission that sends power to front or optional all wheels.

As we said, the 2016 Buick Encore will get three new colors, so you will be able to choose between Summit White, Graphite Gray Metallic and River Rock Metallic. In addition, the front end gets several important changes and now has a redesigned grille, restyled bumper and new headlight styling. The rear end should also have new tweaks with new bumper design and updated taillamps, while there will be 18-inch chromed 7-spoke ultra-bright aluminum wheels. Inside, the amazing compact crossover will likely adopt different infotainment system and some minor design changes, as well as the new navigation and AM/FM/SiriusXM stereo. All together, the vehicle will be more modern and dynamic, mainly oriented to younger drivers.

The refreshed 2016 Buick Encore will be introduced either before the end of this year or in early 2016, while the starting price remains around $25,000.