If you haven’t ridden in the current Lexus LX 570, then you have no idea what means luxury-loaded SUV. The vehicle has greatly different interior from its rivals, and this way functional cabin along with finely detailed instrument panel can be founded only inside of Toyota Land Cruiser. This two SUV’s are pretty similar, and both will come updated this year. Still, since the 2016 Lexus LX 570 comes from manufacturer’s luxury division, we vote for this one. As we said, the 2016 Lexus LX 570 will come just updated, so there won’t be some big changes until the redesign in 2018 year. The automaker will rather work on some cosmetic changes and interior upgrades, but the SUV won’t get any performance improvements. 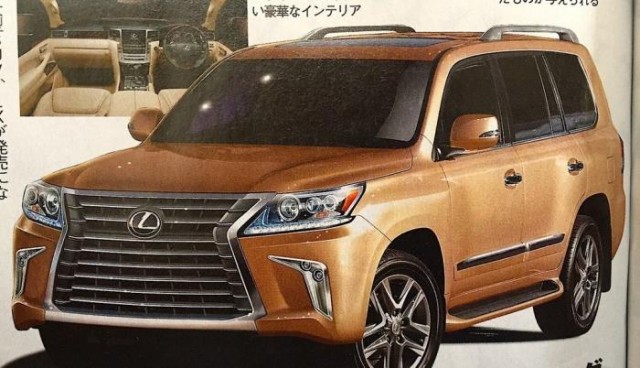 So what you can expect is just a small revamp in both, front and rear ends. However as we already saw the photos of a new model we can say that this year version looks more attractive. This could be because of the redesigned grille that seems to have more aggressive design, or because of the new front fenders. The 2016 Lexus LX 570 also gets the new headlights, while the rear end seems to have new D-pillar and restyled tail lamps. Both ends will probably come with the updated bumpers and the final touch on the exterior will be on the wheels that gets new alloys. The carmaker paid more attention to the interior, which is rumored to have more changes. The outstanding SUV will get a new dashboard with larger screen at the top, as well as a new three-spoke steering wheel with more buttons and options. Lexus also thought on the rear seats passengers, and they will have larger displays, while the vehicle also gets the newest Lexus Safety System.

In contrast to exterior and interior changes, the 2016 Lexus LX 570 won’t have any improvement on the drivetrain. The SUV will continue to use a same 5.7-liter V-8 engine, which delivers 383 HP and 403 lb-ft of torque. The engine will be mated to a six-speed auto gearbox and a 4WD.

The updated 2016 Lexus LX 570 will arrive very soon, possibly this fall, and the starting price won’t differ from the current, which is a little bit over $83,000.