We already heard that Audi is planning to build the high-performance Q2 crossover, but we didn’t expect to see it this year. However, the carmaker obviously decided to introduce the vehicle, which is quite clear after these spy shots of the 2017 Audi SQ2. 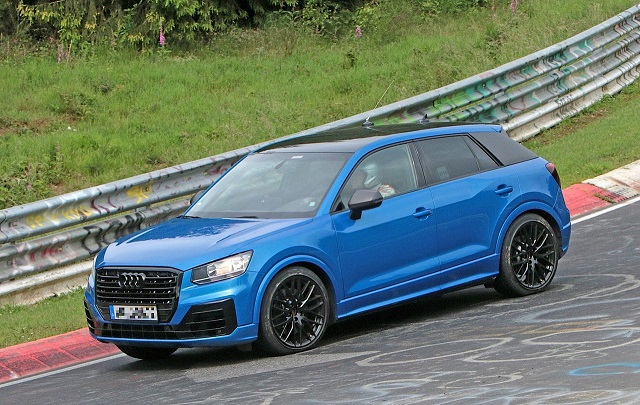 The testing prototype has no camouflage at all, so we can see all the new details that will embellish the high-performance small SUV. In the front, the Audi SQ2 is getting a new all-black grille, as well as more aggressive hood design. The black pain prevails at the crossover, so as you may see there are dark door mirror caps too. The front bumper is featuring larger air intakes, while the rear end sports quad tailpipes and new rear diffuser. This range-topping small crossover looks even more powerful with these large wheels, which are additionally boosted with bigger brake rotors.

We wouldn’t mind to see exactly the same interior treatment as it offers the regular model, but the German car manufacturer thinks otherwise, so the crossover is definitely getting the better treatment. As we have found out, the 2018 Audi SQ2 will feature the amazing virtual cockpit, which further means that there will be a 12.3-inch screen, as well as the head-up display. Of course, the setup also offers some entertainment like as Wi-Fi hotspot, Apple CarPlay and Android Auto connectivity, while the satellite navigation might use Google Earth.

There is nothing official about the engine options of the vehicle, yet the rumors suggest that the crossover might get the same engine like the 2017 Audi S3. This means you will be able to drive the high-performance model with a turbocharged 2.0-liter TFSI engine that is able to produce around 305 horsepower and 295 lb-ft of torque. The drivetrain come paired with the outstanding quattro all-wheel-drive and Electronic Stabilization Control, so the model should offer pretty amazing performance. Speaking of which, the 2018 SQ2 will be able to achieve 60 mph in 4.5 seconds, which is simply amazing.