Audi works on a high-performance SUV that will offer astonishing performance. It is an ultimate version of Q7, or more precisely, the 2017 Audi SQ7 – a SUV that will definitely raise Q7’s athleticism on a higher level. The vehicle is rumored to introduce Audi’s electrically-turbocharged setup and a mega-diesel engine that is speculated to deliver 450 horsepower and 600 lb-ft of twist. 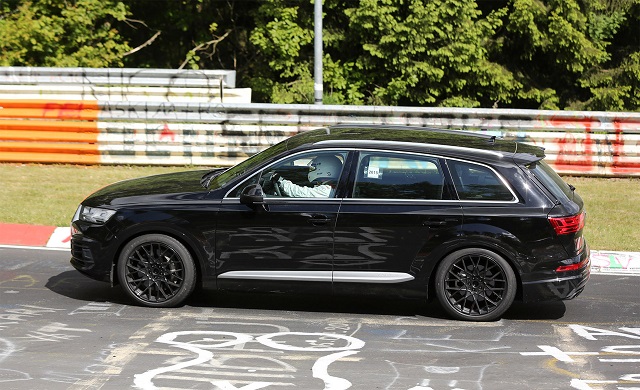 From our point of view, the 2017 Audi SQ7 won’t be just Q7’s upper trim level. It will rather be a SUV that individually creates its “career”. The exterior styling of a powerful vehicle is simply too dynamic to be compared with a Q7. SQ7’s lowered suspension gives an impression of a real performance vehicle, and the quad-exhaust tips say there is lots of power. The outstanding crossover also features the enlarged intakes and big brakes, but the biggest surprise will be its curb weight. Compared to its biggest rivals, the seven-seating vehicle will come with around 4,500 pounds, which is flyweight in this category. This is achieved by using VW Group’s new MLB modular-longitudinal platform that will also shave 700 pounds from the new-generations Q7.

However, the most interesting thing about will come with the 2017 Audi SQ7 will be under the hood. There the hot SUV hides an amazing, so called “e-boost” system that will be paired with a V-8 TDI, which will jointly deliver 450 HP and 600 lb-ft. It is the system that the carmaker introduced with the RS5 TDI concept, but instead of a V-6, the SUV gets V-8 unit. This drivetrain should not stay a sole option, and as we have found out, the 2017 SQ7 will also offer a gasoline 4.0-liter twin-turbo V-8 from the RS7. This one will come with 560 horsepower, while the both drivetrains should use a performance-tuned eight-speed automatic, all-wheel drive system.