Chevrolet’s Colorado pickup truck is one serious off-road vehicle, but you know that already. Still, the manufacturer never stops to remind us on that. They’ve shown once again how capable this truck can be with a new concept, which is recently introduced at this year’s SEMA show in Las Vegas. The 2017 Chevrolet Colorado ZR2 AEV concept is made in collaboration with off-road manufacturer American Expedition Vehicles.

The new outfit includes plenty of off-road kit of course. The truck features AEV front and rear off-road bumpers and some heavy underbody skid protection. The co-development also brought a snorkel and 35-inch BF Goodrich KM2 Mud-Terrain tires paired with 17-inch wheels, as well as high clearance fender flares. They’ve lifted the pickup truck for additional 1.5 inches. There is a new rear driveshaft made of steel, which replaces the usual aluminum piece. Speaking of aluminum, we’ve to mention aluminum wheel spacers with longer studs as well. Around back, the 2017 Chevrolet Colorado ZR2 AEV has got stainless-steel exhaust systems. 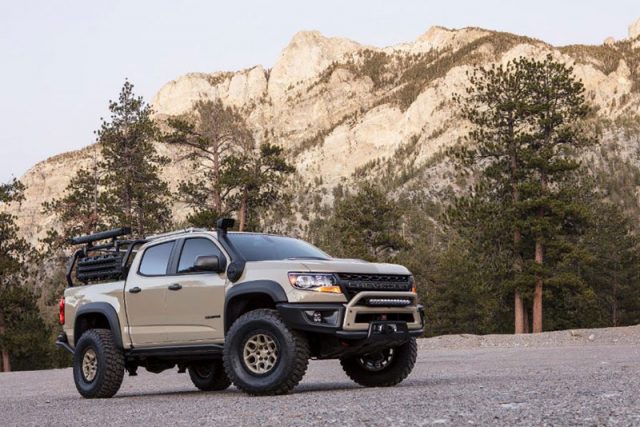 Still, the most important parts of the 2017 Chevrolet Colorado ZR2 AEV concept are revised Multimatic DSSV spool-valve dampers, which provide longer-travel front coil and rear leaf springs, as well as a new rear differential cover that’s connected with the truck by anti-wrap rear-axle linkage. The manufacturers have increased impact absorption with front and rear jounce shocks. 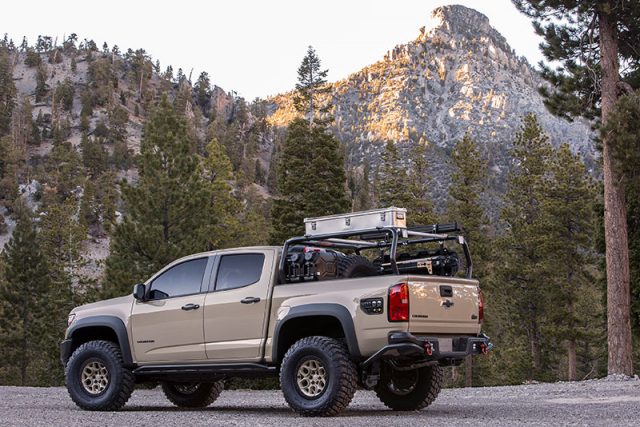 The special mid-size pickup truck is mated to a 2.8-liter turbocharged inline-four diesel engine and a six-speed automatic transmission. Chevrolet didn’t say whether there usual 181 horsepower and 369 pound-feet of torque under the hood or more, but we hope there will be some additional pony included when the vehicle arrives in dealerships.

As for the arrival, the manufacturer hasn’t said anything specific on that matter, yet we know that the equipment will be offered in some form, possibly as a new topping trim level.