Chevrolet is doing some final tests on the all-new 2017 Chevy Colorado ZR2, so we hope to see the amazing pickup truck very soon, likely at the upcoming 2016 Los Angeles auto show. Moreover, the concept version of the impressive vehicle has been introduced at the same place two years ago, which strongly indicates that the American carmaker could use a similar scenario. 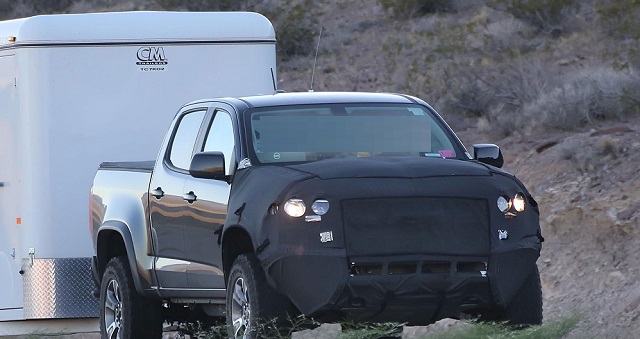 The prototype we see here is still deeply buried under the camo, so we can’t say that the production model looks just the same as the concept. Still, the overall bodywork strongly suggests that there won’t be too many differences. Of course, the overall exterior layout will be toned down, so there will be no such a details as overly large wheels or overemphasized fenders. On the other hand, the front-end styling will look just the same and really outstanding. Both grille and bumper looks rather identical, while the headlights appear to be restyled.

There Will Be Three Engines

In contrast to the aforementioned concept that has a diesel drivetrain, the testing model you see is using a gasoline engine. It’s the GM’s 3.6L V-6 mill that is capable to develop around 305 horsepower and 269 lb-ft. Still, the carmaker added some new technologies like cylinder deactivation, so the unit should deliver a bit more power. According to our insider, the final output will be 310 hp and 271 lb-ft of torque.

The upcoming 2017 Chevy Colorado ZR2 will definitely have several other options under the hood. We can’t say which one, but we expect a 4.3L EcoTec3 OHV V-6. The manufacturer will probably offer the concept’s oil-burner, which is a Duramax 2.8L I-4 diesel. There is no word about the suspension system yet, but we are pretty sure that they prepare some amazing off-road package.