GMC’s black “obsession” continues. After the special-edition Canyon pickup, the American car manufacturer introduced the blackened SUV. The 2017 GMC Terrain Nightfall Edition shares its paint and some other parts of the package with aforementioned truck, which makes it largely different from the standard version.

The 2017 GMC Terrain Nightfall Edition sports almost all-new front end, which features a mildly redesigned grille and reworked bumper. The small SUV rides on the new and gloss dark 18-inches wheels, while the rest of the exterior gets everything else completely black, including even the mirrors, luggage rails, door handles and license-plate surround. However, the Terrain Nightfall isn’t necessary Onyx black. Of course, it keeps its black nature, so the front and rear ends, as well as other mentioned elements remain in darkness, while the rest of the body could get optional Summit White, Graphite Gray Metallic and Crimson Red Metallic colors. On the inside, the SUV is getting a special treatment and standard IntelliLink infotainment software, as well as 4G LTE Wi-Fi hotspot. 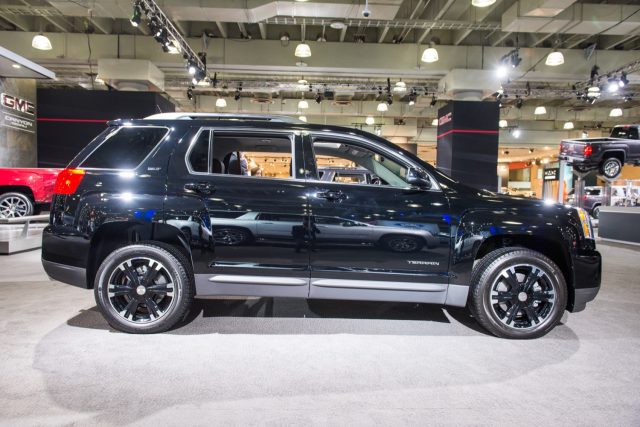 You will not be able to get the 2017 Terrain Nightfall Edition with the standard equipment. The car manufacturer decided to introduce it just with SLE-2 and SLT trim levels, so you will be able to choose between the standard 2.4-liter engine and the more powerful 3.6-liter mill. In any case, the smaller four-cylinder produces around 180 hp, while the V6 pumps out around 301 horsepower.