The new generation Honda Ridgeline is just one year from its arrival (or even less), but judging by how much we know about the future pickup truck, it seems that it is already here. The manufacturer may be mysterious about this vehicle, but notwithstanding we found the way to get to know with the 2017 Honda Ridgeline. 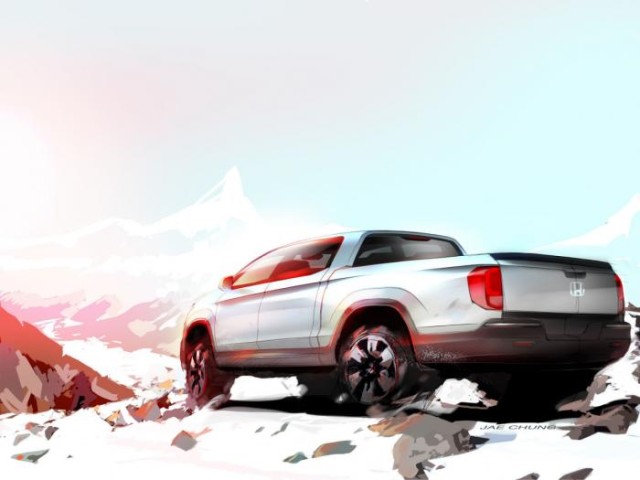 Honda’s only pickup waits for the arrival of second generation over 10 years, so it is pretty clear that the carmaker prepares a big redesign. Since we already saw spy photos of the 2017 Honda Ridgeline, it is quite clear that the truck losses its distinctive angular design. Honda recently released the all-new Pilot SUV, which is an important part of this story. This is because the new Ridgeline looks pretty much the same as this SUV. Well, not exactly the same, but the front end seems to have everything identical. This way, the carmaker reduces the risk of mistakes, because everyone loves the Pilot SUV and its design. As for the rest of the body, the pickup will look just as any traditional pickup. It gets a vertical rear C-pillar, and also new bigger proportions, which will be the most evident inside. There the truck gets more comfort and space, while we also expect better tech and equipment.

You must think that this is all from Pilot-based pickup – but not. The 2017 Honda Ridgeline will also borrow the platform and drivetrain from its SUV sibling. This Honda’s light-truck platform made its debut with 2014 Acura MDX, but now underpins the current Pilot and future Ridgeline. In addition, the pickup will get Pilot’s engine as well. It is a 3.5-liter V-6 with 300 horsepower and mated to a 6-speed automatic transmission, which will send the power to four-wheel-drive system. The drivetrain will feature cylinder deactivation, so there is a good chance to see a respectable fuel economy.

The arrival of the 2017 Honda Ridgeline is planned for the end of text year, and the starting price won’t be under $30,000.