Believe it or no, Mercedes is preparing one more all-new crossover. Now, this wouldn’t be that strange that this is not the 2017 Mercedes-Benz E-Class Crossover. Yes, you hear me well – the German carmaker will make the high-riding E-Class model, and it won’t be just the Estate mode, but true crossover. 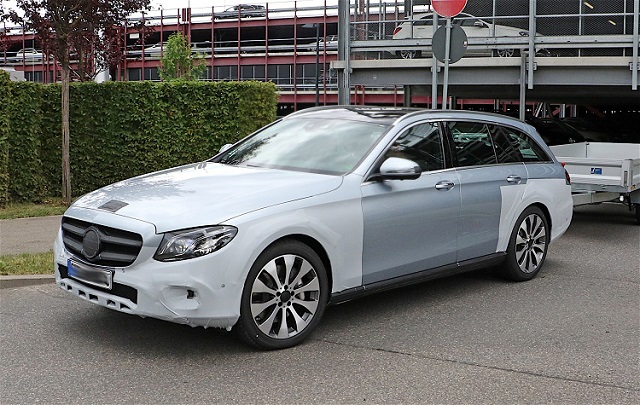 The spy shots we have here may indicate that this is a wagon, but no, we are sure it will be the crossover. At least, the manufacturer will claim it is the all-new high-riding car. As for the exterior styling, it seems that there will be lots of familiar cues all over the body. Of course, the 2017 Mercedes-Benz E-Class Crossover will largely resemble the E-Class sedan. As a matter of fact, the front end will be just the same, while the rear hatch is getting its own design. The bodywork will be more dynamic from the Estate model, while the front and rear bumpers appear really aggressive and pretty unique. The same goes for wheel archers, which are quite wide and make the overall appearance so damn powerful.

Under the hood, the 2017 E-Class Crossover will offer just everything you can possibly imagine. Well, maybe not the all existing lineup, but really wide range of engines. The base model will have a 2.0-liter unit that will deliver 211 horsepower and 258 pound-feet. There will be also a 3.5-liter V-6, which will develop 333 horsepower and 354 lb-ft of twist. The carmaker will offer a range of diesel options too. A 2.0-liter oil-burner will produce 194 horsepower and 295 lb-ft, while the stronger 3.0-liter V-6 should be able to make 258 hp and 457 pound-feet. We almost forget to mention a plug-in hybrid model that will use a drivetrain that pairs a 2.0-liter engine and an electric motor. All-together, the mill will deliver around 300 horses. As for the gearbox and drive options – the manufacturer won’t make any risk, and will offer just Mercedes’ 9G-Tronic automatic transmission and a 4Matic all-wheel-drive system, without any other option.

The interesting crossover-wagon will make its official debut before the end of this year. The producer will definitely offer the vehicle in North America, and the starting price should be around $65K.