The Qashqai is Nissan’s best-selling nameplate in the Europe at the moment. However, this small SUV is not sold in the North America so far, but the latest spy photos indicate that the automaker plans the U.S.-specs model, which will be named the 2017 Nissan Qashqai. If you don’t know, the Qashqai is even smaller than the Rogue, but it is a little bit larger that the Juke, so you are getting one more option to choose. 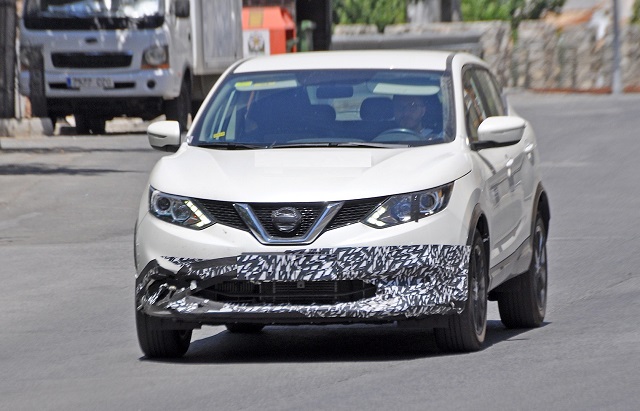 Compared to the current model, this U.S. version will get couple of changes on the exterior. This refers to the front end only, because the carmaker plans to update just a front bumper, which seems larger and with bigger air intakes. As for the inside, the SUV will definitely get a different, more premium design, as well as the updated infotainment system. The manufacturer should also add more tech and safety, and the rumors say it will be upgrade with a forward emergency braking, a motion-activated power rear liftgate, and Siri Eyes Free telematics.

The Europe version is offered with a 1.2-liter gasoline and two diesel engines, while this year model also added a 1.6-litter mill. This last four-cylinder unit should be a base option for the U.S. model as well. It delivers around 160 horsepower and 170 lb-ft of torque, and it comes paired to a continuously-variable transmission (CVT). Except of this one, our market will likely get a 2.0-liter unit, but we don’t now the specifications at the moment.

The 2017 Nissan Qashqai will share the platform and a lot more with the Rogue compact crossover, so if you like the Rogue, you won’t be disappointed with the its smaller sibling too. The only difference is that the new SUV might come a little bit cheaper, because as we have found out, the carmaker plans to set the price at around $20,000.