Peugeot’s new generation 2008 crossover has been spotted completely camouflaged. The prototype hides most of new details, but it still shows certain details. We gotta say it doesn’t feature its unique design, because of General Motors and Peugeot-Citroen collaboration. Yes, the all-new 2017 Peugeot 2008 will be pretty similar to the next Citroen C3 Picasso and the Opel/Vauxhall Meriva. Of course, the small crossover will be unique in some extend, but essentially these three model will mostly differ because of different badges. 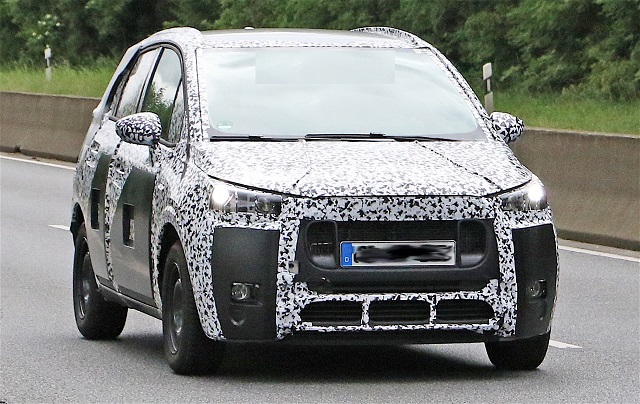 In any case, you can expect the 2017 Peugeot 2008 to ride on the all-new platform. So called PF1 architecture will make more space for various engines, and will enable better handling and cornering due the reworked suspensions. The exterior design is where the Peugeot could outmatch its “partners”, because we expect to see quite amazing styling, especially in the front end. The crossover was already dynamic, but the car manufacturer plans to add more aerodynamic. In addition, the mini SUV gets all-new chrome grille that will sport vertical inserts instead of its current horizontal slats. New lightening cluster will be even more aggressive and will feature LEDs, while the new roofline seems to be lowered.

Under the stylish hood, the 2017 Peugeot 2008 will change its engine options, so instead of current 1.4-liter diesel and 1.6-liter gasoline, the new generation model will likely offer a new 1.2-liter three cylinder gasoline and a 1.6-liter diesel engines. The new 1.2-liter unit will come in three completely different setups, so you can choose between the model with 81 HP that is matted to either a five-speed manual or a five-speed electronically-control gearbox, or the version that gets 108 horsepower which also offers a six-speed automatic transmission. At the end of the road, you will find the more powerful option that delivers 128 horsepower that is paired with a six-speed manual gearbox only. As for the oil-burner model, it comes paired with a 1.6-liter HDi, which will also offer three different flavors. You can go for the weakest unit with 74 HP, or the one with 99 horsepower, or eventually the range-topping model, which pumps out 118 horsepower.

Although shares plenty of characteristics with two other crossover, the 2017 Peugeot will continue to be quite good option. The car already delivers some great features, so the new generation model must be even better. However, this shouldn’t have a big influence on the price, which would likely stay unchanged, so you will still be able to buy the outstanding vehicle for less than $20K.