Ram already introduced its new Power Wagon at the last Chicago Auto Show, so how we just caught the testing model? Well, it pretty simple because the carmaker plans to offer two trims, and this will be the better one. Yes, it is so called 2017 Ram Power Wagon Laramie, and yes it’s the best Power wagon you can imagine. 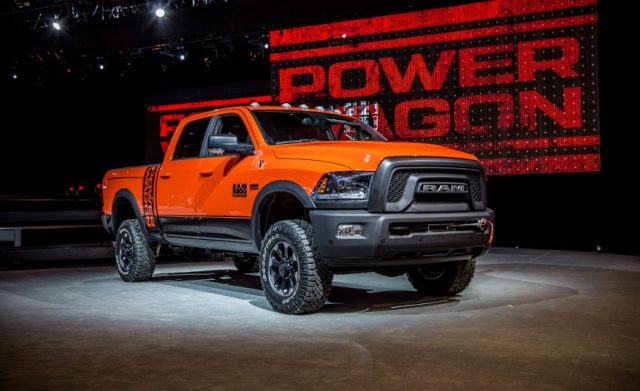 Still, it looks that there is no too much differences between the exterior styling of the base and Laramie models at all. The testing vehicle could get some small reworks, but essentially both models adopted plenty of cues from the Rebel truck. However, in contrast to the prototype’s black grille, the production-ready pickup will have a shiny chrome front, as well as completely different lettering treatment down the body. The testing vehicle is using the usual 17-inch alloys, yet the manufacturer could add a few more inches for the 2017 Ram Power Wagon Laramie, so we expect at least 18-inch wheels, with aluminum treatment of course. The off-road beast will sport an ultra-luxurious interior, which will be enriched with a number of useful features. We have no the details, but since it’s the Laramie, it must have everything that Ram have to offer at the moment.

Apart of a big number of small pleasures inside and a little bit redesigned and bold exterior treatment, the 2017 Power Wagon Laramie won’t have other changes. It means you can expect the same, yet really amazing drivetrain. The truck will use a 6.4-liter Hemi V-8 with 410 horsepower and 429 lb-ft of torque, and a six-speed automatic transmission. There is also the front suspension system with Bilstein monotube dampers, as well as the anti-roll bar. Around back, the axle also features Bilstein shocks and third dumper, which binds the frame and axle.

As you see, the 2017 Ram Power Wagon Laramie isn’t just some shiny jackass truck, but the real thing that is not for everyone. It will deliver great power and really stylish design, so we wonder how much could cost this kind vehicle. Well, the way things are, we must wait for a couple months, because the carmaker should introduce the badass truck at the upcoming 2016 Los Angeles auto show.