Land Rover’s design department is currently working on the 2017 Range Rover, which is just spied while undergoing some winter testing somewhere in North Europe. The prototype has been partly camouflages, so it is quite clear that the car manufacturer prepares a mid-cycle refresh of its solid full-size SUV. 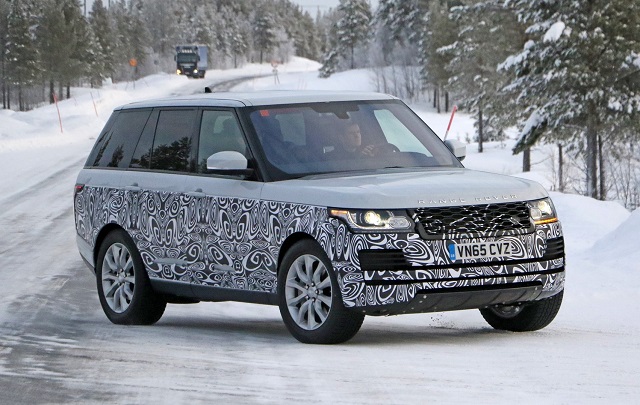 The facelifted model seems to feature a number of changes on the front end, which might get an all-new honeycomb grille and an updated front bumper. It is quite obvious that the new Ranger Rover lacks fog lights, and yet has the new air intakes, which tells us that this could be a new trim level of the SUV. The headlight area looks unchanged at the moment, yet there is a big possibility to see some new details there as well. The sides of the SUV are also covered, so there might be certain changes on the doors (it looks like there are no vertical blades on the front doors). The rear end is unchanged at the moment, but we expect to see a new taillight styling on the production version.

The 2017 Land Rover Range Rover will also get several updates inside, staring from new upholstery and perhaps additional colors. There is a big possibility to see carmaker’s latest autonomous tech systems, which is actually the amazing communications equipment that will make driving safer and easier.

2017 Range Rover Could Get Boosted Engines

The testing mule of the SUV features an exhaust system that suggests there is a gasoline engine under the hood. There might be some tweaks on the current V6 supercharged 3-liter engine, so instead of 340 HP, the refreshed 2017 Range Rover could get 380 horsepower mill, just the same like the new F-Pace. The diesel model will definitely continue to use a 3.0-liter turbo diesel Td6, but instead of present 440 pound-feet and 254 horsepower, the unit could turn on a second turbocharger and deliver more power.

In any case, the facelifted 2017 Range Rover should be introduced at the 2016 Paris Motor Show, while the starting price of the outstanding full-size SUV should be unchanged.