Well, well, well. What have we here? It seems that we were right once again. Chevrolet is really working on the comeback of the off-road SUV.  We only missed one thing in the previous reports. Namely, the vehicle won’t arrive as a 2019 model, but as the all-new 2018 Chevy Blazer. In addition, this time we have the first spy shots of the model, which is completely camouflaged, but it still shows more than enough details. 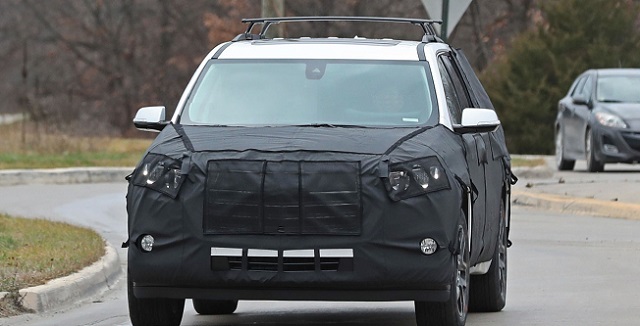 Of course, the testing model has been spotted in Michigan, and of course, it’s not the new generation Travers. The cues may fool you, but this is too small SUV, so yes we are pretty sure it’s the new generation Chevrolet Blazer. The nameplate is returning to take a part of the revived off-road market. While Ford plans to reintroduce the Bronco and Toyota to redesign the 4Runner, it was pretty expected to see some new model from Chevrolet to go head-to-head with them.

Now, we are not so sure what’s down below the camo, yet it’s certain that the 2018 Chevy Blazer won’t have anything on common with the Travers or Equinox. It is because the nameplate can revive only if they do the job properly, which includes the distinctive exterior at the first place. Of course, since we are talking about a true off-roader, it should get some heavy kit specially made when you decide for rough terrains.

It’s pretty clear that Chevy’s powertrain department could try with several options under the hood. However, we can guarantee for one at the moment. It’s the recently updated 3.6-liter engine that is capable of delivering around 310 horsepower and 271 lb-ft of twist. Our biggest doubt is whether the car manufacturer plans to use some body-on-frame chassis or the new C1XX platform. If you ask us, we are always for the first option. At least if they plan to build the proper off-road SUV.

Believe it or no, the latest reports indicate that the 2018 Blazer could be introduced at the 2017 Detroit Auto Show. We don’t think it will be ready that fast, but you never know.