A testing prototype of Honda’s fifth generation CR-V is spotted several times, so the reports about the vehicle are bringing more and more information on the table. It’s not the secret that the Japanese automaker plans to add the third row of seating and some new options for its best-selling crossover, but we are not so sure whether it is worth the wait for the new generation 2018 Honda CR-V. Still, according to the latest rumors the redesigned vehicle will be better option, and here is why: 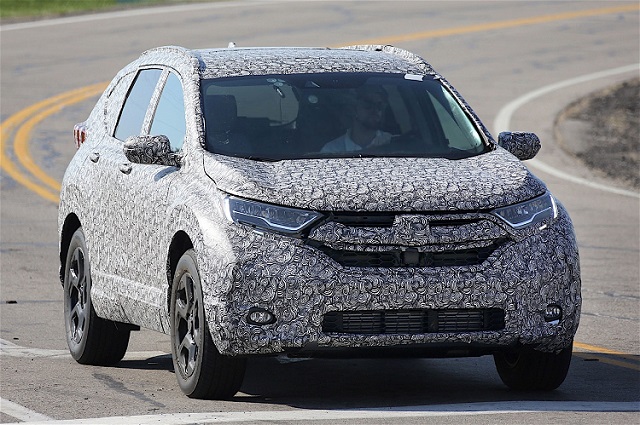 The new-gen CR-V is getting new platform for sure, but we still have nothing about it. Judging by the speculations, the manufacturer plans to shed some weight and enlarge the crossover at the same time. We don’t expect anything big at all, but the base version should be light for around 200 pounds. In addition, the architecture should be highly stretchable, so the 2018 CR-V could come as a regular five-seater and extended three rows SUV. This third row could be a big plus for the vehicle, but only if the carmaker do it properly and provide enough space in there. However, judging by the spy shots, the car seems to feature excellent bodywork, which is adjusted to the future needs.

When it comes to the exterior design, we must say that everybody has its own taste, but we kinda think that the next generation Honda CR-V gotta be prettier from its predecessor. This is because the producer plans to make it less like the minivan and more as the crossover. Yes, the new CR-V will feature more aggressive lines, especially in the front end. The sporty stance is additionally boosted with longer hood and really large grille. The new model will also adopt completely new lightening cluster, but we are quite amazed with taillights that sport vertical styling, just the same like Acura’s crossovers.

The famous mid-size SUV is getting full-LED, which is pretty interesting, but not the only technology change. Honda recently upgraded Honda Link infotainment system and the Honda Sensing suite, so you can expect both, better safety and higher level of entertainment.

The 2018 Honda CR-V will also change its current engine lineup. We know because the prototype uses dual exhaust tips, which wasn’t the case with the “old” 2.4-liter naturally-aspirated unit. Instead, the carmaker will offer the new and smaller 1.5-liter turbo four engine, which produces 174 horsepower under the hood of the new Civic, but it might come tuned a little bit. It’s provides a little bit less power than the current mill, but it delivers better fuel economy without any doubt. Moreover, the Japanese automaker will offer the standard front-wheel drive and optional but completely new all-wheel drive system. As for the transmission options, the new Civic added newly developed six-speed manual, which could be an option for the outstanding SUV. Still, it’s sure that the CVT stays as a standard transmission.

That’s not all, because the crossover won’t offer just the 1.5-liter option. It is rumored and very likely to see a hybrid or even a plug-in drivetrain, which will be one more good card on the table for sure.

At the end, regardless the fact that it comes as the new generation model, the 2018 CR-V won’t change its price.Yes, the carmaker has no plan to increase the base price, which currently starts at $24,600. Of course, the model with third row of seating will cost more.