Wagons are not the most popular type of cars at the moment, but we are still impressed with some of them. One of such vehicles will be the next generation XF Sportbrake without any doubt. The British car manufacturer just announced the arrival of the amazing wagon at the 2016 Paris Motor Show. Moreover, they released the first spy photo of the upcoming 2018 Jaguar XF Sportbrake, which will be ready for its official debut sometime next year. 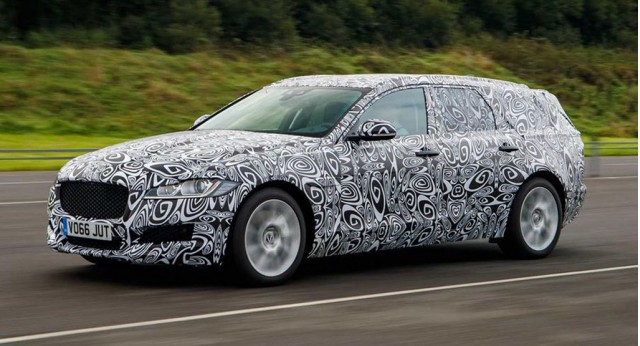 Until now, the impressive wagon was never sold in North America, but the redesigned 2018 XF Sportbrake is definitely coming here, which is already confirmed from Jaguar Land Rover North America CEO Joe Eberhardt.

The current model is one of the most beautiful cars in the segment, so we are a bit sad because the next gen 2018 Jaguar XF Sportbrake won’t be the same. Still, judging by the single spy shot, the new version will inherit plenty of details from its predecessor, so the bodywork should largely resemble the car we know. In contrast to the recognizable face, the next generation luxury wagon will largely differ under the skin. The carmaker will use the same platform as the XF sedan, so we assume that the front could get the identical cosmetic treatment. Of course, the new architecture will shed some weight due the extensive use of aluminum.

These two will probably share the engine options, which mean that the 2018 Jaguar XF Sportbrake could easily get the new 2.0-liter gas engine. Of course, some markets will also get an oil burner option that is going to use the current but revised 2.0-liter diesel engine. The manufacturer could also offer a hybrid or maybe plug-in hybrid drivetrain, as well as the most impressive 5.0-liter mill. At the moment, the unit delivers 550 horsepower and 502 lb-ft of torque, yet the new model should get the boosted version that’s going to produce even more power.

If the rumors become the truth, then you can expect to see the new generation XF Sportbrake next year at the 2017 Frankfurt Motor Show.

Refreshed 2021 Mercedes-AMG E63 Wagon Spied Lapping At The Nurburgring
2020 Audi RS 6 Avant Spotted Lapping At The Nürburgring: The wagon comes to North America
2021 Jaguar F-Type Facelift Announced For December 2
2020 Audi A4 Allroad Gets A Mid-Cycle Refresh
2020 Audi S4 Avant Gets A Mid-Cycle Update
2020 Audi RS4 Avant: Facelifted wagon is coming to North America
2021 Jaguar E-Pace Gets Changes Inside, Out, And Perhaps Even Under The Hood
2020 Mercedes-AMG CLA35 Shooting Brake: Svetle Wagon Introduced, But It Won't Be Available In The US
2020 Mercedes-Benz CLA Shooting Brake Is Heading To Geneva
2021 Audi e-tron Allroad Spied Dancing On Snowy Roads Of Scandinavia
2021 Jaguar F-Pace Updated And Electrified SUV Spied Testing