We were right once again! Jeep is working on the updated version of its Cherokee. Yes, the small SUV has been spied partly camouflaged for the first time, which suggests that will undergo a mid-cycle refresh. To be frankly, the car manufacturer won’t have too much job here, so we expect to see the updated 2018 Jeep Cherokee pretty soon, most likely before the end of this year. 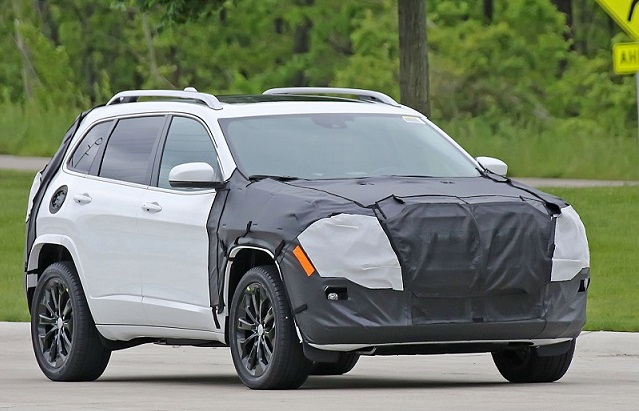 The testing model sports wrapped front and rear ends, which point out what’s changed. However, the camouflage is still quite bulky and prevents us from seeing the new details. We think that the 2018 Cherokee might lose its current lights in favor of totally new lights. More precisely, today’s separate daytime running lights and main projectors should be replaced by a pair of single units at each end. The new headlights will be LED without any doubt. We know because the prototype’s LEDs are shining through the camo. Of course, these are not the only changes. No, the amazing SUV will sport a bit reworked bumper and grille, as well as a pair of new taillights in the back. Plus, the carmaker plans to add two new exterior colors.

Performance wise, the 2018 Cherokee will definitely add one more option under the hood. The base model will continue using the current 2.4-liter inline-4 with 184 horsepower, but you will be able to get the Trackhawk model as well. The new topper will allegedly feature a tuned version of the 3.2-liter V-6. Now, there is nothing official regarding the output, yet we think it’s going to achieve around 300 horsepower. Except for the more potent option, Jeep’s compact SUV will likely get a new transmission as well. Yes, the refreshed high-riding vehicle will get an optional 9-speed automatic gearbox.

The prototype appears to have a number of sensors all around, which suggest that the 2018 Grand Cherokee might get some new features. However, don’t expect anything big as auto-pilot, but just some new active safety aids.

Anyway, as we said earlier, the refreshed Cherokee SUV will be introduced later this year, so we should found out more juicy details pretty soon.