It isn’t a secret at all that Toyota’s luxury department works on a three-row SUV. However, we weren’t able to catch any testing mule in the past. Today our photographers managed to spot a vehicle which seems to be a pre-production prototype of the 2018 Lexus RX three-row. Unofficially, the SUV will be introduced very soon, most likely at the upcoming 2017 Los Angeles auto show. 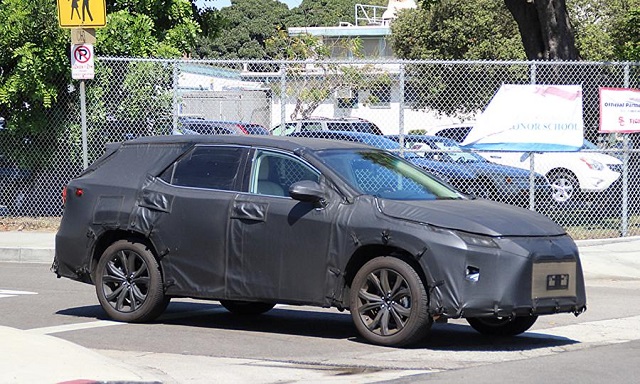 As you can see, the prototype is completely camouflaged, so we can’t really say what’s going to be new. However, it appears that the car manufacturer won’t make any huge changes here. No, the three-row SUV seems the feature unchanged wheelbase and pretty much the same front end. At the other side, the car manufacturer made a few important changes, so the new model features longer and flatter roof with a more upright tailgate. In addition, the rear overhang is a bit longer, yet enough to tuck in the third row of seating. Even though we can’t see, we are pretty sure that the 2018 Lexus RX three-row is also getting a few cosmetic changes in the front. The producer will likely update headlights and grille, but nothing more.

The SUV will rely on existing engine options. The 2018 Lexus RX three-row will be offered with a 3.5-liter V6 engine with 295 horsepower and 267 pound-feet of torque. The power will travel to either front or all four wheels via the eight-speed automatic transmission. The carmaker will continue to offer a hybrid option as well. The option will pair the same 3.5-liter with an electric motor, for the output of 308 horsepower.

This won’t be the first three-row Lexus of course. The Japanese carmaker offers GX and LX already, but with the introducing the three-row RX, Toyota’s luxury division will become even more popular, especially in China and North America. There is no official information regarding the price of the SUV, however, we are pretty sure it’s going to cost a bit more than the regular two-row model, possibly around $47K.