Maserati’s first-ever SUV looks really glorious, which isn’t too surprising when you take a look at the rest of the lineup. However, except of the captivating bodywork, which is rugged and powerful at the same time, the 2017 Levante is also quite impressive inside and under the hood. The high-end interior possesses everything you can imagine, while you can’t make any mistake whichever the engine option you choose. There are two versions of the 3.0-liter turbocharged V-6 gasoline engine (345 hp and 369 b-ft or 424 hp and 428 lb-ft), and an oil-burner six-cylinder mill that produces 271 horsepower and 443 lb-ft. All units are matted to a Q4 all-wheel-drive system and ZF eight-speed automatic transmission, and all drivetrains provide really respectable performance. Still, the Italian carmaker has no intention to stop there, so it already works on a high-performance model, which will be called the 2018 Maserati Levante GTS. 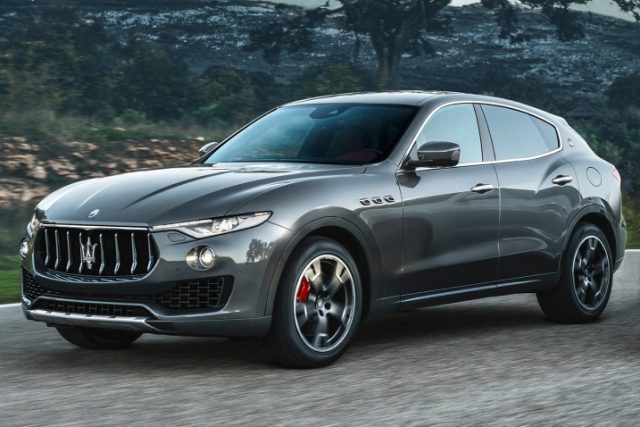 According to topspeed.com, the 2018 Maserati Levante GTS will definitely borrow the Quattroporte GTS, so you can expect an amazing 3.8-liter V8 engine, which currently delivers 523 horsepower and 479 pound-feet of. Still, the carmaker could additionally upgrade the mill, so it might be able to pump-out around 575 hp. If this happens, the SUV could drop its 0-60 sprint at around 3 seconds, which will be really impressive result. As for the gearbox and driving system, we don’t expect any changes, so the ZF transmission and Q4 all-wheel-drive should stay unchanged. However, the AWD system will be retuned and the air-suspension system might be stiffer. The high-speed SUV requires better braking-system, so the manufacturer could add six-piston calipers at each corner.

We are not so sure what to expect from the exterior design, but the 2018 Levante GTS will likely get a bit restyled layout. Judging by the rumors, the GTS option will feature a redesigned front fascia, which will be lowered and widened. Both, the grille and intake will receive a honeycomb treatment, while the front bumper might look more massive. The carmaker won’t touch anything on the roof and rear hatch, but on the other hand, the GTS SUV will likely get a bigger and more stylish wheels, as well as redesigned taillights. Except of the ultra-aggressive exterior, the 2018 Maserati Levante GTS will also get more premium touches inside. This won’t be easy at all because the amazing vehicle already features a fascinating cabin. Still, since this is the GTS, you can expect sportier treatment, with sport seats, Alcantra leather all around, as well as plenty of aluminum inserts.

The high-performance Levante SUV will definitely cost much more from the regular model. We expect nothing less from $120,000.