We already announced the arrival of Mercedes’ new generation G-Class SUV, but now we have some fresh details. Namely, the 2018 Mercedes-Benz G-Wagen will not be just some off-road “charlatan”, but the true off-roader, as it was earlier. In contrast to the current model which is at the “end of life” for more than ten years, the next-gen G-Class will feature everything you can possibly expect from the off-road “emperor”. The car manufacturer will definitely change a lot inside, out, under the hood and beneath the skin, but will keep the distinctive look of the classic. 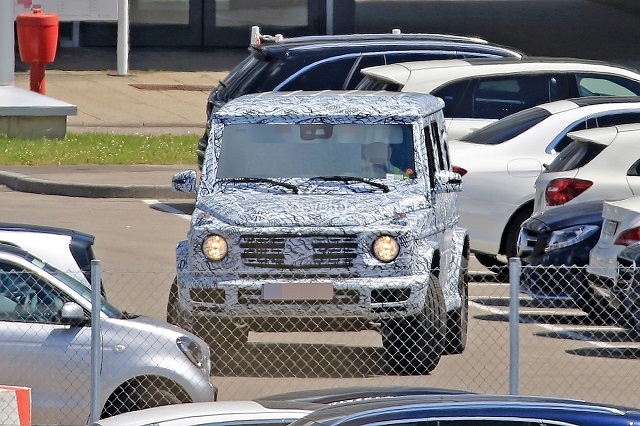 The exterior is still heavily wrapped so we have all the details. However, the camouflage is tight to the body, so we can actually see the differences between the old and new vehicles. Judging by the spy shots, the 2018 G-Wagen will keep the basic bodywork, yet there will be more aerodynamic and some new details. The overall body will be wider for about four inches, while the length and height stays unchanged. In addition, the SUV sports an all-new hood styling and redesigned grille in the front and more pronounced windscreen, as well as totally different rear with side-hinged tailgate. As for the interior design, what we saw so far isn’t too impressive, but it shows that the 2018 Mercedes-Benz G-Class won’t lose its identity at all. There is a pretty simple dash design, analog gauges for the speedo and tacho, but also an empty space for a display, possibly the same 12.3-inch infotainment screen as it features the new E-Class sedan. The amazing system will likely offer everything it has, so you can expect a number of useful features like Android Auto, Apple CarPlay, a 3D satellite navigation, wireless charging, Wi-Fi, and Internet surfing and lots more.

Like we already announced, the 2018 Mercedes-Benz G-Wagen will have a wide range of engine options. In contrast to US market that won’t have any diesel-powered option, the European drivers will definitely get some oil-burner six-cylinder mills. On the other hand, the gasoline model will likely use the twin-turbocharged 4.0-liter unit with several output options. However, what we found out now is that the SUV might also offer a twin-turbocharged V-12 engine. All engines will be paired with a nine-speed automatic transmission and all-wheel drive system. However, these outstanding drivetrain will be nothing without proper suspension improvements. No, the new-gen G-Class won’t use any new platform, but it will largely change the current. In place of the hydraulic system, the SUV will get an electromechanical system, as well as entirely new suspensions that will boost handling, cornering and stability, which are pretty poor at the moment. Of course, the carmaker will pack a number of latest driver-assistance systems for a better safety, while the overall efficiency and rigidity should be improved with the use of aluminum and high-strength steel.

The mighty vehicle is still far away from its debut, so we will found out more in the coming months. Anyway, this SUV will continue to be an exclusive piece of work, so don’t you expect anything under $120K. Of course, there will be the 2018 Mercedes-Benz G-Wagen AMG model too.