Nissan’s mid-size pickup truck is delayed, so it won’t be introduced during this year. However, the Japanese car manufacturer will definitely introduce the new generation Frontier sometime in 2017. We know this because we already saw the first testing mule, which is thoughtfully hidden under the skin of the current model. The 2018 Nissan Frontier will clearly look completely different from the second generation model. The current version came as the all-new in 2004, which makes it really old. Still, since the overseas sibling Navara came all-new in 2015, we already know in what direction will go the third-generation Frontier pickup truck. 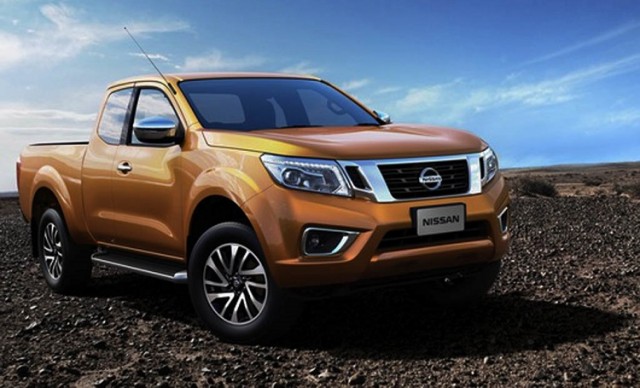 Like we said, the 2018 Frontier will resemble the Navara, but not completely. We think that the American model definitely gets more Titan-like design, so there will be less aerodynamics than Navara. The front end will have a new chrome grille that will feature new inserts, while the headlights should be identical to Titan’s lightening cluster. In contrast to Navara’s front bumper that is colored in body paint, the next-generation Frontier will likely sport a black-chrome combination, which will be additionally embellished with new air intakes. Unlike the current rather flat bodywork, the new vehicle promises to get more ruggedness, so you can expect larger fender and bumpy hood, as well as certain oddities around back. The popular pickup will likely have Navara’s rear styling, with identical tailgate design and distinctive step bumper and trailer hitch, as well as standard backup camera. The automaker will offer two cab configurations: the base King and optional Double cab, and possibly Nissan’s new cargo bed technology.

When it comes to interior styling, the 2018 Frontier will definitely take the best form the new Titan XD. It means that the new pickup truck might change the cab design by adding the new four-spoke steering wheel and larger buttons. Like we said, the backup camera will be the part of the standard equipment, while blind-spot monitoring, lane departure warning and automatic braking should be offered too.

Under the hood, the 2018 Frontier will receive the old-new packages. This means that pickup should continue to use its current 2.5-liter four-cylinder, but the engine will get a comprehensive pack of changes. Except of more horses and torque, the unit will be additionally improved with new technologies. As for the oil-burner, we expect to see a 2.8-liter Cummins, while the more powerful option should be a reworked 4.0-liter V-6 mill. The base model will be offered with a standard six-speed manual gearbox, while the rest of the lineup gets a seven-speed automatic transmission.

According to the newest reports, the new generation Frontier pickup will start be priced under $20K, which is the great news. However, the Double cab model with the best possible equipment could easily cost $30,000.