Porsche’s new generation Cayenne is almost ready. We’ve spotted the production-ready prototype several times before, yet the newest testing vehicle reveals even more. According to the latest reports, the SUV won’t be just handsome and luxurious piece of metal, but also very powerful and hybrid. More precisely, the carmaker confirmed the arrival of the 2018 Porsche Cayenne Turbo S E-Hybrid, which is going to feature an amazing powertrain.

Judging by the information we have, the Turbo S E-Hybrid will use a drivetrain that combines a twin-turbo 4.0-liter V8 and an electric motor. This setup has been introduced already under the hood of the Panamera S E-Hybrid, so we know everything about it. The twin turbo mill produces 550 horsepower and the electric motor adds 136 ponies, while a decoupler with an electric clutch actuator mixes the powers, giving the car a brutal output of 680 horsepower. Of course, the drivetrain is mated to an eight-speed dual-clutch automatic transmission and all-wheel drive. The 2018 Cayenne Turbo S E-Hybrid will also feature a 14.1-kWh lithium-ion battery pack that will provide the electric-only range of around 30 miles. Since the amazing Panamera succeeds to achieve an impressive 0-60 sprint of around 3.2 seconds, we think that the new Cayenne Hybrid won’t be over 3.5 seconds.

As we announced earlier, the new generation Cayenne will use a new architecture. This so-called MLB Evo platform won’t only reduce SUV’s curb weight, but also improve handling and rigidity. This is quite clear because the new architecture includes plenty of high-strength steel and aluminum and even carbon fiber. Of course, the 2018 Porsche Cayenne Turbo S E-Hybrid will be just of options. The manufacturer will introduce a range of gasoline engines, as well as at least one more hybrid powertrain, yet less mighty but more efficient. Some markets will see oil-burners, yet do not expect to see the next generation Cayenne Diesel in the United States due to VW Group’s diesel emissions scandal.

Styling wise, the 2018 Porsche Cayenne Turbo S E-Hybrid won’t differ at all from the regular model, at least not from the outside, but it should have some distinctive details inside. The producer might add several outstanding details inside such as four-zone climate control, all-new touchscreen interface, and better infotainment and connectivity options. They won’t skip the chance to bring a number of semi-autonomous features and improved safety without any doubt. 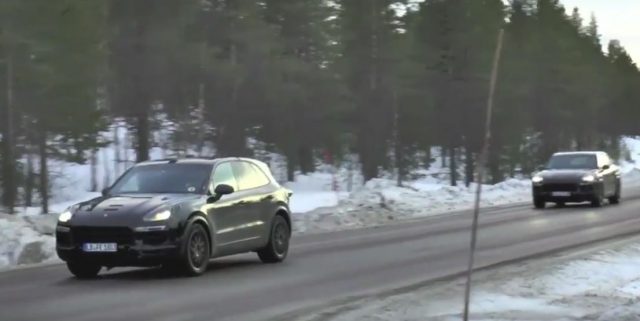 The 2018 Porsche Cayenne Turbo S E-Hybrid won’t be the most powerful SUV available, but it will be one of the baddest high-riding vehicle available, so we can hardly wait to see the production model.