Hyundai’s all-new Kona crossover has been introduced just a few days ago. Even though it’s the smallest and youngest SUV from Hyundai, it’s bringing the carmaker’s new design language, which will be implemented across the entire high-riding lineup. The first model that will get the similar treatment is the next generation Santa Fe. The mid-size SUV won’t arrive redesigned before mid-2018, but the manufacturer started with testing. Moreover, this is the third time we spotted the 2019 Hyundai Santa Fe. 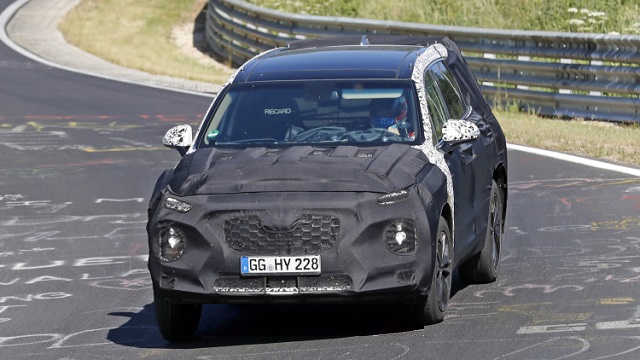 Of course, the testing vehicle is still covered with heavy camouflage, so it’s pretty difficult to figure out what’s beneath. However, judging by the spy shots, the next generation Santa Fe might borrow plenty of details from the smaller Kona. This especially refers to the front end and split headlight design. Yes, the redesigned SUV will feature separated daytime running lights from main projectors. In addition, there is a cascading grille, probably “stolen” from the Elantra GT (and Kona). We are not sure because the camo hides everything, yet it seems that the bigger brother might also borrow hood design from the Kona. If this happens, the 2019 Hyundai Santa Fe will definitely look more attractive than the predecessor.

It’s really interesting the fact that the testing models use Recaro racing seats. Now, we are a hundred percent sure that the production won’t have anything similar at all. Unless the carmaker decides to build a high-performance version of the 2019 Santa Fe that needs to have this kind of seats. Still, the chances are almost none.

There are no official words regarding the future powertrains of the next generation Hyundai Santa Fe. However, according to the latest reports, the SUV will probably offer naturally-aspirated V-6 and inline-4 options, while the new topper should use some kind of plug-in hybrid powertrain. Most of the rivals are offering hybrid drivetrains already, so the 2019 Santa Fe Hybrid isn’t too far from production lines without any doubt.