According to the latest reports, the facelifted Mercedes-Benz GLC is not going to wait for early 2019 to be introduced. Instead, the public will be able to see what has been changed on the amazing crossover at this year’s Frankfurt Motor Show in September. The U.S.-specs 2019 Mercedes-Benz GLC will most likely land at the 2018 Los Angeles Auto Show that begins on Friday, November 30. Our photographers spotted the updated crossover while it was checking out new abilities. The vehicle was camouflaged at its ends only, so these are the spots where we can expect the biggest exterior changes. 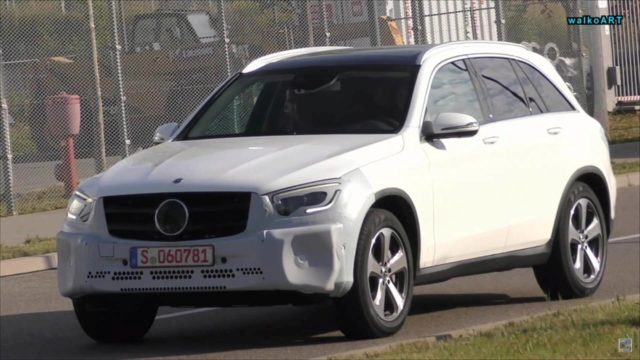 The thin layer of white camo hides the redesigned bumper in the front. We think that the modified bumper hides new air intakes. Above, the 2019 Mercedes-Benz GLC gets a pair of refreshed headlights with new graphics and an updated grille that appears to be identical to one we saw on the new-gen GLE. The rear end isn’t as restyled as the front. Moreover, we currently see just facelifted taillights and nothing else. The cabin will be redesigned as well. Just don’t expect to see the automaker’s latest dual-screen layout this time. Instead, the updated SUV will host an enlarged infotainment display and a new multifunction touchpad. Plus, Mercedes will probably add a few new driving aids.

The crossover will get a range of upgraded engines under the hood. The oil-burner GLC will get an all-new 2.0-liter diesel engine which will deliver 194 horsepower and 400 Nm. The base GLC upgrade the 2.0-liter turbocharged inline-4 to deliver 255 hp instead of today’s 241 horsepower, while the GLC 43’s output will grow from 367 to 390 HP. The topping AMG-treated model will use a 3.0-liter twin-turbo that’s going to be bumped from 362 to 385 horsepower. All engines will be mated strictly to the 9-speed G-Tronic auto. As for the all-electric  EQ C crossover, well, we suppose it’s going to be introduced in early 2019.