Truth to be told, this blue paint fits perfectly to BMW’s entry-level crossover. However, we’d rather want to know what’s beneath the camouflage than which color suits best to the updated 2020 X1. Essentially, the Bavarian carmaker never flaunts with the mid-cycle update. Instead, they usually keep the changes, which they prefer to call Life Cycle Impulse, quite modest. Meaning you won’t see anything too revolutionary when the wrappings fall down. 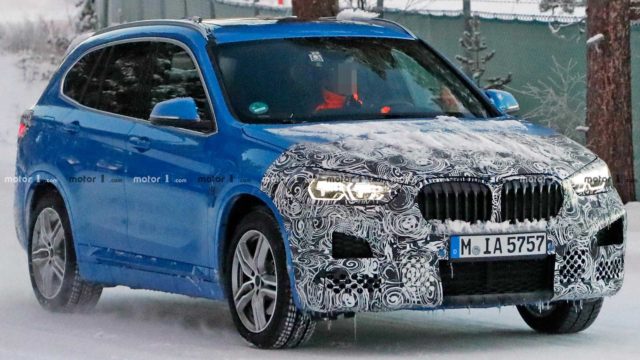 As far as we can see, the 2020 BMW X1 gets a pair of reshaped LED running lamps and a bit more angular air inlets in the corners of the front fascia. While the front bumper appears to be slightly revised, crossover’s grille is definitely carried over. In the rear, the small SUV hosts a redesigned bumper and new graphics for the taillights. At sides, you will notice new alloy wheels and nothing else new.

Inside, the 2020 BMW X1 appears to get minimal changes. We’ve spotted the redesigned gearshift right away because this new one looks sharper. More precisely, it has been taken from the new X2. In addition, the crossover gets a larger infotainment screen which will also host updated software. The refreshed crossover will most probably keep its engines untouched, but there will be some changes. How is that possible? For Europe, the 2020 X1 will receive some new filters and engine controls in order to meet more stringent emissions standards. In addition, the car will host an all-new hybrid option that’s going to combine a 1.5-liter turbo three-cylinder engine (B38) with an electric motor. Also, BMW will offer a high-performance SUV, so-called X1 M35i. The M-treated model will use the B48 mill capable of delivering 302 horsepower and 332 pound-feet of torque. Since it’s skipping the 2019 Detroit Auto Show in January, the 2020 BMW X1 will most probably land at the next year’s Geneva Motor Show. In the meantime, the crossover will make an online debut.