Honda’s all-new mid-size crossover has been a rumor for a while. However, the automaker’s future high-riding vehicle is not going to stay the rumor for a long time, because they’ve started testing the prototype of what appears to be the 2020 Honda Passport. Honda has not confirmed this nameplate so far, but there are several reports that claim the same thing, so we assume it’s the truth. 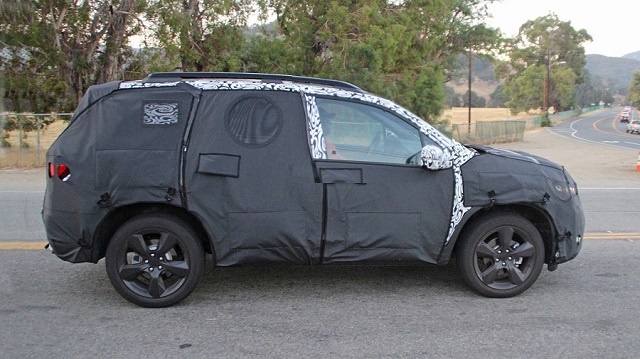 Anyway, the heavy camouflaged SUV seems to feature a footprint which will fit between the Pilot and CR-V. Meaning, it’s going to fight in the same segment where currently rule the Ford Edge, Nissan Murano, GMC Terrain, Chevrolet Equinox, and lots of other similar models. Even though the segment seems to be overloaded already, we are pretty sure that Honda can and will grab a big piece of the market cake for itself.

As far as we know at the moment, the 2020 Honda Passport is going to feature pretty much the same shape as the Pilot. Moreover, these two will share the same platform, so we can expect pretty much the same characteristics as well. Of course, the new mid-size SUV will be smaller than the Pilot and will have a shorter rear overhang. In addition, it’s going to get a unique front-end styling with a mesh grille and sharp and wide LED headlights, as well as a more aerodynamic hood design.

Spy shots of the interior don’t reveal much at the moment. However, it seems that the 2020 Passport is going to get the same dashboard as the bigger sibling. More precisely, the air vents are identical, while the testing model also hosts the same main screen. Of course, the will add the newest version of infotainment and latest driving aids. It’s important to say that the carmaker is reconsidering to offer an optional third row of seating.

We still have no information regarding the powertrain of the all-new SUV, so stay tuned for updates. Who knows, maybe the carmaker decides to add something completely new under the hood this time.