The heavy camouflage definitely hides a large SUV from Kia, yet this one doesn’t carry the Telluride nameplate for sure. Instead, the Korean automaker works on a new Mohave model. Let’s be more precise and say that the redesigned vehicle will ride on the current platform so we can’t really say that the 2020 Kia Mohave is going to be the new-generation model. No, the SUV will receive an extensive update instead.

In addition to the same architecture, the 2020 Mohave will most probably use today’s engines as well. The trio of mills, however, might receive some improvements, so the potential buyers can expect more power and torque under the hood of the new Mohave. Just to remind you, the current model offers a 3.0-liter V6 turbodiesel, and a 3.8-liter and 4.6-liter gas units. In addition to more power, the mills will come paired exclusively to an eight-speed automatic transmission, while there will be a choice of front- and all-wheel-drive systems.

The camouflaged prototype hides a totally new body design. Judging by the spy shots, the big SUV will be largely influenced by the Telluride. These two will share the same grille and headlights in the front, as well as a set of specific and chunky fog lamps. The rear end should feature new tailgate and taillights, both inspired by the Telluride. 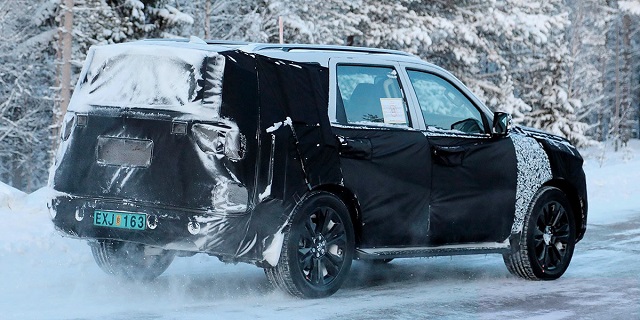 Like we said before, this is not going to be just a mere cosmetic update. No, because the 2020 Kia Mohave is going to host a lot better safety aids than the predecessor. Depending on an amount of money you want to set aside, your Mohave could feature blind-spot monitoring, lane-departure warning, tire pressure monitor, lane-keep assist, adaptive cruise control with speed limiter, a 360-degree camera, and a head-up display.

The updated large SUV which is also known as the Borrego in some countries will most likely arrive before the end of this year.