Audi’s fleet will get a countless number of electrified models in the new future. The automobile brand made the decision to become as “green” as possible not so long ago, but regardless of the fact, they are progressing surprisingly fast in the “green direction”. For instance, at recently finished Geneva Motor Show, the company announced the arrival of electrified A6 and A8 sedans as well as the A7 Sportback and Q5 SUV. That’s not the end of the list though. No, they’ve been working on the 2021 Audi Q8 PHEV as we speak. 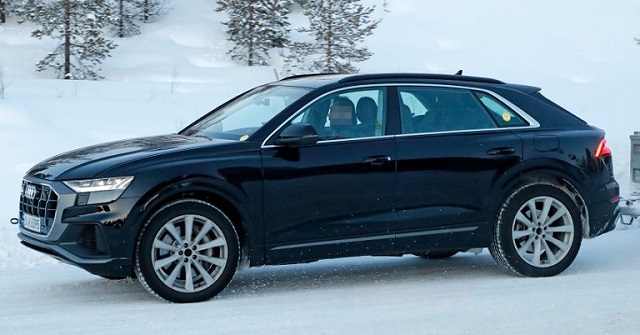 The flagship plug-in hybrid has been caught testing somewhere in Northern Europe where snow never disappears. The stylish SUV might be looking to you as the regular 55 TFSI model, but that’s not the case for sure. No, as this one sports a yellow sticker that reveals the SUV’s electric nature. So, is it possible that automaker was testing the mild-hybrid model out there?

No! Not this time! No way! The sneaky automaker tried to trick us with the fuel filler cap at the left fender, but that can’t be the case as the regular Q8 comes strictly with a right-fender fuel door. Meaning, the left one hides a different kind of gate, probably a charging port for the plug-in hybrid.

It’s still unclear what’s going to use the 2021 Audi Q8 plug-in hybrid, yet we think we know what’s cooking under the hood. The luxury crossover will most probably get the already checked combination of a 3.0-liter V6 gasoline engine and a ‘box-mounted electric motor. Together, the drivetrain should develop 367 horsepower and 369 lb-ft of torque. The mighty mill will supply Audi’s quarto all-wheel drive via a seven-speed dual clutch transmission, while the electric motor must be getting sparkles from a 14.1kWh battery. According to first reports, the 2021 Audi Q8 PHEV will be able to travel using electricity alone around 25 miles, which is not so bad for the big fellow, don’t you think? 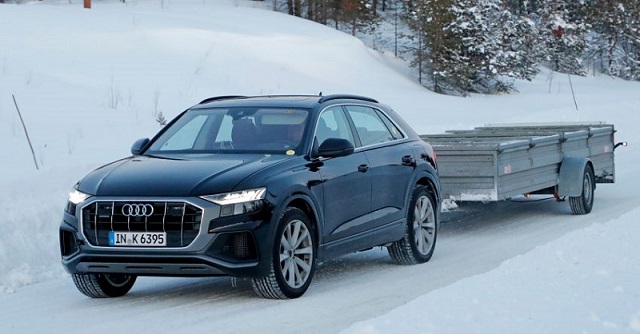 Although it looks like a “done deal” right now, the electrified Q8 won’t arrive as soon as you might be thinking. If everything goes well, the flagship crossover could appear sometime next year.