Hyundai missed an opportunity to introduce its first pickup truck this year, but it won’t skip the chance in 2019 without any doubt. In case you’ve forgotten, the automaker previewed the Santa Cruz workhorse in concept form at the 2015 Detroit Auto Show, and since then we knew that the production model is coming. The information has been officially confirmed to Autocar recently by the company’s chief design, Luc Donckerwolke. 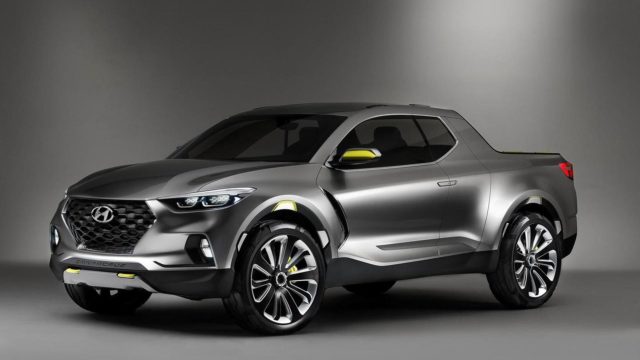 Truth to be told, he hasn’t said when exactly the 2020 Hyundai Santa Cruz is going to arrive, but he did confirm that the design of the production model has been finalized already. Now, guys from Autocar expect the pickup in 2020, but we believe that the model has to arrive next year.

The carmaker hasn’t chosen any name for the future pickup truck so far. However, we think it’s going to be the Santa Cruz. Also, Hyundai’s sister company Kia will build a vehicle with pretty much the same characteristics, yet with a totally different exterior and interior designs.

Regarding the 2020 Hyundai Santa Cruz, well, the exterior styling will definitely mirror the concept model to some extent, but body lines will most probably be toned-down. The pickup will exploit the Tucson’s current platform. Moreover, the workhorse will be built together with the crossover in the United States at the Alabama factory.

Power-wise, Hyundai’s pickup truck will probably skip the chance to offer concept’s diesel engine. More precisely, the oil-burner choice won’t be available right away, yet maybe sometime in future. Instead, the 2020 Santa Cruz will most probably be introduced using a 2.0-liter turbocharged four-cylinder engine. The mill will reportedly develop 245 horsepower and 260 pound-feet of torque. It will be paired with an eight-speed automatic transmission and all-wheel drive.

The all-new pickup truck will fight against Ford Ranger, Honda Ridgeline, and Toyota Tacoma in North America, while the model needs to outmatch the Renault Alaskan, Mercedes-Benz X-Class, Mitsubishi L200 in Europe.