Volvo’s all-new V60 wagon is going to make the official debut at the upcoming 2018 Geneva Motor Show. However, we got a few leaked shots of the redesigned car before the official arrival. A site from Bosnia and Herzegovina somehow managed to get the official photos of the 2019 Volvo V60 ahead the introduction. Though they were forced to take them down the same day they were posted. Still, the images are shared too many times to be taken off the complete internet, so enjoy into the new of the amazing mid-size wagon:

The images show something that we basically knew already. The redesigned wagon will likely look pretty much the same as the larger V90 model. Moreover, aside from a sportier profile, the 2019 V60 will share pretty much everything with its bigger brother. Though, the more pronounced downwarp roof slope is making it really more attractive and dynamic, so we have to say that the smaller wagon looks better.

We still don’t know what’s going to happen inside of the wagon, but we largely expect to see a familiar 12.3-inch digital gauge cluster and a 9.0-inch touchscreen infotainment display. The Swedish carmaker could add some styling tweaks from the recent Garmin interior concept, but let’s wait just a bit more to see what’s actually happening inside.

On the other hand, we are pretty aware what’s going on under the skin and beneath the hood. The 2019 Volvo V60 will just as the majority of the latest cars from Volvo use the scalable SPA architecture, which is able to support a range of engine options, including all-electric powertrains. 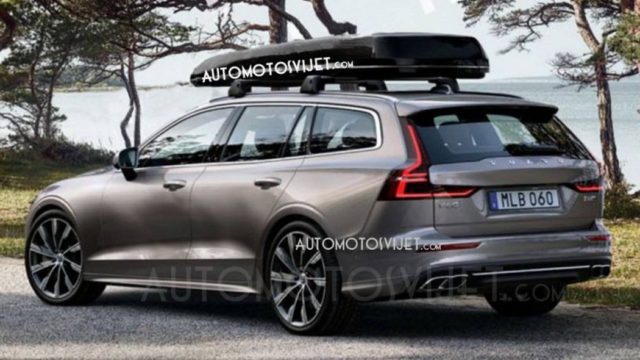 The new wagon will probably share the drivetrain units with the XC60 SUV. The U.S. version of the crossover currently offers a turbocharged 2.0-liter inline-4 (so-called T5) with 250 horsepower and a supercharged and turbocharged 2.0-liter inline-4 (T6) which is capable to deliver 316 horsepower. The topper will use a T8 drivetrain, which is basically a plug-in hybrid combination of the T6 and an electric motor. Altogether, the T8 deliver exactly 400 horsepower. Some rumors claim that the standalone performance brand Polestar works on the V60 as well. Still, we have nothing about it at the moment.