We already knew that Ram prepares something special, but we haven’t expected this. The car manufacturer has just unveiled the impressive 2017 Ram Rebel TRX concept, which will likely get the production model in near future. The off-road oriented pickup truck isn’t just handsome, but also very capable because it uses a powerful supercharged 6.2-liter engine and eight-speed automatic transmission. Yes, the same system that powers Charger and Challenger. As we see it, the TRX concept may easily become the 2018 RAM 1500 Hellcat. 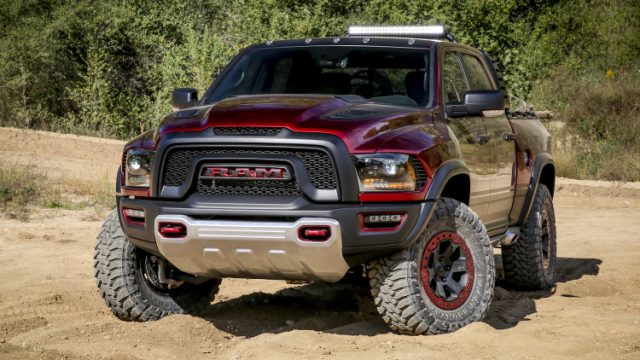 Like we said, the amazing concept is using the same engine like Dodge’s mighty cars, but it won’t deliver all 707 ponies. The manufacturer decided to reduce the output a bit, so the concept pickup delivers “just” 575 horsepower from the 6.2-liter V8 mill. Now, we are not sure how many seconds will pass before the vehicle hits 60 mph, but this isn’t too important, because the carmaker says it will be able to achieve 100 mph over rough terrain. In addition, the biggest rival of the 2017 Ram Rebel TRX is Ford’s newest Raptor, which lacks around 125 horsepower.

Off-Road Equipment All Around

Except of the different powertrain, the 2017 Ram Rebel TRX concept also sports some visual and some mechanical changes. As you may notice, there are pretty massive 37 x 13.5-inch tires, which also made some revisions on the suspension that got 40-percent of increase. Altogether, the TRX is around 6 inches wider form the regular Ram 1500 and this makes it ultra-impressive. Moreover, the producer added huge fenders, scooped hood with, as well as big steel skid plate up front, which boosts the overall impression.

The 2017 Ram Rebel TRX isn’t Raptor’s rival because it’s just the concept, but it will become in a year two without any doubt.