Toyota’s Land Cruiser is a hard-core and an off-road SUV from its beginning. Yet, the carmaker constantly upgrades the reliability and comfort of this body-on-frame four-wheel drive vehicle, so the rivals must work hard to reach its capabilities. This generation Land Cruiser has been introduced back in 2008, and now it is the time for the big refresh. The 2016 Toyota Land Cruiser will receive meaningful series of changes, which will make it better for sure. 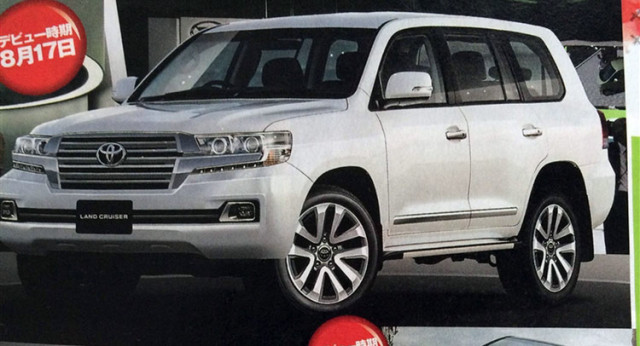 The 2016 Toyota Land Cruiser won’t be completely redesigned, but the exterior and interior changes will make it fresh and really useful. The exterior styling of the SUV now gets a modern, yet boxy design, while the rear end seems pretty the same. The front fascia will have a new grille with more chrome details and the LED headlights will receive a different shape. In addition, there is a new and aggressive front bumper, with the restyled fogs, while the rear section features new LED taillights. The interior changes will include a new dash design and an all-new infotainment, but we have no the details about this matter.

A full-time four-wheel-drive system with a 5.7-liter engine will continue to be a part of the 2016 Toyota Land Cruiser, but the rugged SUV will likely get more power. The final output is not confirmed yet, but as we have found out, the current 381 HP and 401 lb-ft of torque should be transformed into 390 HP and 403 lb-ft, which will be enough change to deliver better performance. The outstanding engine will be paired to a six-speed automatic and all four wheels of course.

The updated 2016 Toyota Land Cruiser will be introduced this year in the Europe, while the refreshed U.S. version won’t make its debut before 2016. The solid SUV will likely continue with a same price range.