Honda introduced the all-new CR-V Hybrid at the 2017 Shanghai auto show, but what’s more important, the Japanese car manufacturer announced the arrival of the crossover in North America. Now, they haven’s said when it will arrive the interesting SUV, yet we think that there is no any reason for stalling, so it should make the US debut in the coming months. 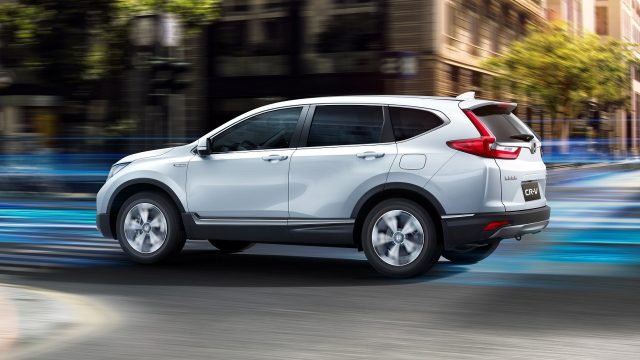 The 2018 Honda CR-V Hybrid uses already familiar powertrain. It’s so-called “Sport Hybrid” system that currently powers the Accord Hybrid. Under the hood of the outstanding sedan, the drivetrain combines a 143-hp 2.0-liter four-cylinder engine, a pair of electric motors, and a lithium-ion battery, for the overall output of 212 horsepower. Aside it delivers more than enough power the system delivers pretty respectable fuel economy figures of 49 mpg in the city and 47 on the highway. Now, the 2018 CR-V Hybrid can’t compare with the sedan, so the efficiency won’t be that good. Still, the crossover will definitely beat the Nissan Rogue hybrid, which will be the biggest rival without any doubt. After all, the Accord weights around 3,400 pounds, while the regular CR-V stops at 3,300 pounds (but it’s bulkier at the same time), so the fuel economy could be almost the same.

Styling wise, the CR-V Hybrid doesn’t get anything different from the regular gasoline-powered model. This means you will be choosing between the efficient 1.5-liter turbo and the ultra-efficient hybrid powertrain.