Ford’s new-generation Explorer will definitely make its official appearance next January at the 2019 Detroit Auto Show. This means that the prototype we’ve just caught is actually the final version of the Platinum trim level.

The redesigned vehicle is still covered with some camouflage, but the thin wrapping actually reveals everything, so we are able to figure out how it’s going to look the topping version of the SUV. First of all, we know it’s the 2020 Ford Explorer Platinum thanks the badge in the back.

Compared to previous testing prototypes, this one gets a totally new front end. More precisely, the topping model hosts a completely different mesh grille and a more aggressive fascia that positioned a bit lower than the usual one. Plus, it sports hexagonal shape. Since we are looking at the topper, the fog lamps will be standard, but the feature will not be here with an entry-level model without any doubt. All the way below, the carmaker added a silver protective cover, which looks like a skid plate, but it can’t be because it’s made of plastic. 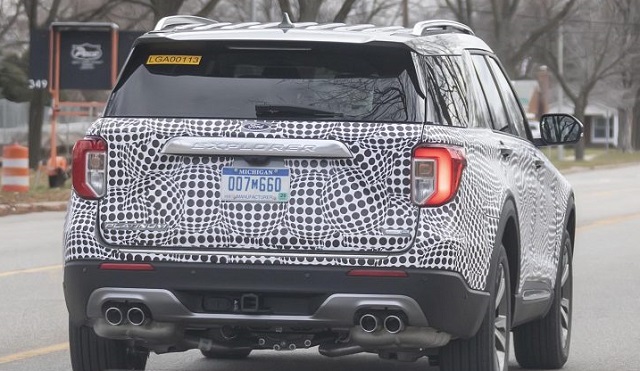 At sides, the 2020 Ford Explorer Platinum looks almost the same as every other trim level. The only exception is the new five-spoke wheel design. In the backyard, the SUV is coupled with quad exhausts tips which are additionally embellished with some silver trim. The model hosts the really interesting tailgate with large ‘Explorer’ lettering.

Since we are talking about the redesigned Explorer Platinum, it’s fair to expect the largest possible infotainment screen and a range of driver assistance features.

Even though it’s the topping model, the 2020 Ford Explorer Platinum will not be the most powerful version of the SUV. No, because the automaker intends to offer a sporty ST version that’s going to be coupled with a 400-hp twin-turbo engine. The new Explorer Platinum, on the other hand, will be paired with a 2.7-liter EcoBoost V6 engine, Ford’s 10-speed auto gearbox, and all-wheel-drive.