The all-new Hyundai Santa Fe was released in 2012, but now the carmaker prepares the refreshed model that will be rolled out sometime in 2016. The updated SUV won’t receive some big changes. There will be just some new exterior tweaks on styling, and possibly a new engine option. Inside, the 2017 Hyundai Santa Fe will adopt the biggest changes. It is expected to receive a new infotainment and dash. 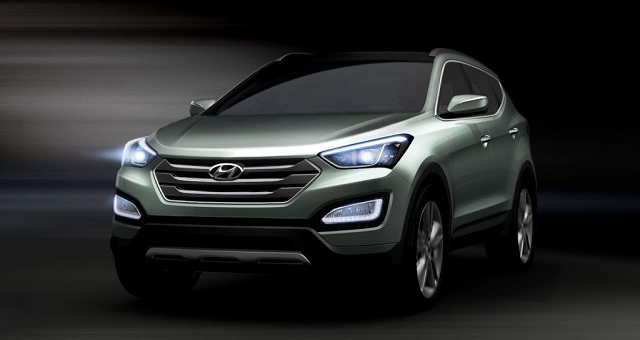 2017 Hyundai Santa Fe Gets a New Engine and Transmission

The current Santa Fe version offers a 3.3-liter V-6 engine that is capable to deliver 290 horsepower and 252 pound-feet of torque. This drivetrain will likely stay unchanged, but the carmaker will refresh the 2017 Santa Fe with a turbocharged four-cylinder engine, which will feature better fuel economy. While the V-6 engine goes with a six-speed automatic gearbox, this new unit will be additionally improved with an EcoShift dual-clutch transmission.

2017 Hyundai Santa Fe with new Design Inside and Out

Hyundai’s design team will refresh both front and rear ends. The front fascia will definitely receive a new grille with chrome surround and horizontal slats, and a restyled bumper. The crossover will also get new headlights, as well as redesigned LED taillights with new graphics. Like we said the interior will be quite different compared to the current one. Except of already mentioned infotainment and dash, the 2017 Hyundai Santa Fe will also get all-new entertainment system. This time the SUV will feature a rear-seat entertainment. Unfortunately, the carmaker has no plan to deal with biggest flows of the model, so you can expect cargo and sitting space.

This crossover already achieves good sale, so this refreshed 2017 Hyundai Santa Fe will likely continue to deliver good results. At the moment the price starts at $30,150, while this mildly updated version could go up for $500.

Updated 06/23/2015: According to the newest reports, the updated 2017 Hyundai Santa Fe will get one more drivetrain option. This will be a hybrid powertrain that works in AWD system and pairs a 3.3-liter twin-turbo V6 engine and an electric motor. The engine will be in charge for the front wheels, while the electric motor works in rear axle.