These days, SUV market seems to be the most popular part of the automobile industry. The manufacturers are working rapidly on new models, which are (some of them) truly masterpiece. One of them that promise to be quite interesting new SUV will come from Maserati, sports carmaker. It will be their first ever crossover SUV, so called 2017 Maserati Levante. 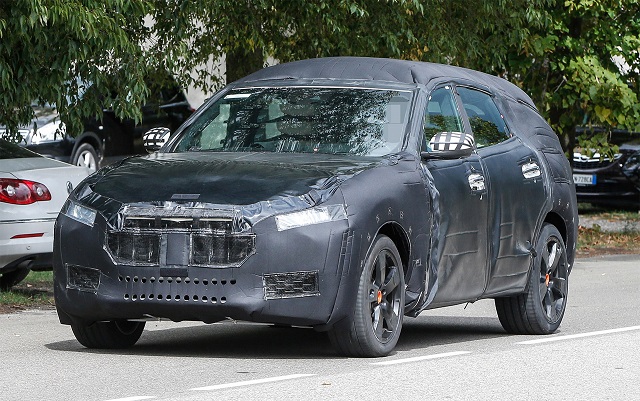 The luxurious new SUV won’t be completely independent, because the carmaker will employ a platform that also uses the current Ghibli and Quattroporte. Still, the underpinnings will be shortened, so you can expect slightly shorter, but notably wider vehicle in comparison to the Ghibli sedan. As for the exterior design, the 2017 Maserati Levante will come pretty similar to the Kubang concept, which is originally presented at 2011 Frankfurt auto show. The camouflaged prototype that we saw may just receive some small changes on the front end, but essentially, the 2017 Levante will look just like the Kubang. Unlike the exterior styling that is pretty clear, we have no idea what to expect inside. The carmaker will definitely make it modern and luxurious, but we have no further details about the interior and tech.

The 2017 Maserati Levante is a true and big project of the carmaker that plans to introduce this amazing SUV with its best features. Because of that, Maserati will offer even three outstanding engine options. A base engine will be a turbocharged 3.0-liter V-6 that delivers 350 horsepower, and the second six-cylinder unit is rumored to produce 450 horsepower. The last, but the best option will be a 3.8-liter V8 engine that will deliver a staggering power of around 580 hp. The engines will be matted to an eight speed auto gearbox and all-wheel-drive only.

From our point of view, the 2017 Maserati Levante will be a really big rival of the Porsche Cayenne. The all-new SUV will be introduced sometime next year, and the price should range from $100,000 to $200,000, depending on the trim level.