Even though it’s officially introduced already, the new-generation GMC Sierra 1500 pickup truck isn’t quite ready at the moment. No, because the manufacturer has so many trim levels in mind. So far we’ve seen the topping Denali, the rugged AT4, the mid-ranged SLE, and the base half-ton truck. GMC doesn’t stop there. Instead, they are preparing a few additional versions. Yesterday, for instance, the carmaker drove out a prototype that appears to be the 2019 GMC Sierra Elevation Edition. 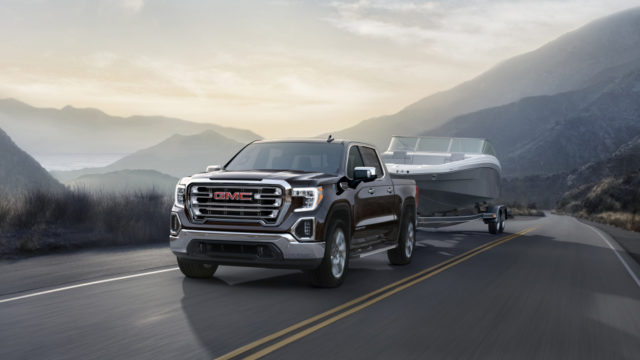 The special package sports a few exterior changes which are camouflaged at the moment. As far as we can see, the Elevation pickup truck will host the different grille surround and revised bumper in the front, while the rear end gets just the reworked bumper and nothing else. Now, we don’t expect from the trim level to be as shiny as the topping Denali, though it won’t be as plastic as the base model either. The latest spy shots don’t give away what’s inside. However, we are pretty sure that the pickup truck won’t get anything special at all, but standard equipment.

In contrast to the AT4 which will offer some off-road goodies like a two-inch suspension lift, upgraded dampers, two-speed transfer case, locking rear differential, and skid plates, the 2019 GMC Sierra Elevation Edition will have not of them. Still, the package will likely be available will all three engines. The list includes a 5.3-liter V8 produces 355 and 383 pound-feet of torque, a 6.2-liter V8 with 420 hp and 460 lb-ft, and a 3.0-liter diesel which will arrive sometime later. The pickup truck may also get a 2.7-liter turbocharged four-cylinder unit too. The carmaker hasn’t confirmed the option yet, but the sibling from Chevrolet is getting the amazing engine, so we don’t see why GMC would skip the chance to offer it under the hood of the new-generation Sierra.

The 2019 Sierra Elevation Edition and other trims will go on sale this fall.