Volkswagen introduced a new mid-size crossover SUV several days ago at the Shanghai auto show. According to the manufacturer, the model which was revealed as the Teramont X in China will become available in North America as well. Though, the U.S.-specs Teramont X will use another nameplate. Unofficially, we will be dealing with the 2020 Volkswagen Atlas Cross Sport or just the Atlas Sport. 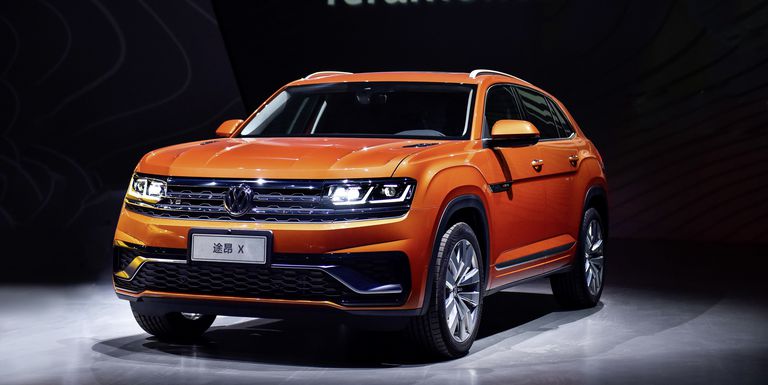 In contrast to already available three-row Atlas, the Cross Sport model will be limited to two rows and five seating positions. This one is significantly smaller from the three-row sibling as well. Its length is limited to 193 inches, which is 7.5 inches less; though it’s also about 2.3 inches lower and that precisely makes the two-row Atlas more attractive. In addition to its low roofline, the model sports a rakish rear liftgate and restyled rear windows. In the back, the VW’s new mid-size SUV features a set of totally new taillights, while the face reveals pretty interesting LED headlights which fit perfectly into the shiny grille. At sides, the crossover has been fitted with quite bold wheel arches.

Since the automaker decided to cut out around 7.5 inches of length when compared to the three-row brother, this Sport version of the Atlas basically provides pretty much the same amount of space for front- and rear passengers as the even-seater. Luckily, that’s more than enough room for everyone. The crossover will use pretty much the same equipment as the bigger Atlas. Meaning, the entry-point model will feature a 6.5-inch touchscreen with standard Mirror Link, Apple CarPlay, and Android Auto. The base 2020 VW Atlas Cross Sport will also have a six-speaker stereo, Bluetooth, and a USB port. Potential buyers will be able to upgrade the SUV by an 8-inch infotainment screen, as well as with a 12.3-inch digital display, HD Radio, satellite radio, and a 12-speaker Fender premium stereo. There will be three extra USB ports as well.

According to our insiders, the two-row Atlas will host two powertrain options. The regular model will likely exploit pretty much the same mill entry-point as the larger sibling. That’s a 2.0-liter turbo-4 rated at 238 horsepower. The Cross Sport will probably avoid the regular 280-hp V6 engine. Instead, the automaker will try with a hybrid drivetrain that combines the 3.6-liter V-6 and a pair of electric motors. Together, they will deliver a respectable amount of power that’s estimated to be 355 hp, as well as an electric drive/range of 26 miles thanks to an 18-kWh battery. In contrat to the four-cylinder unit that’s going to come fitted with an eight-speed auto ‘box, this one will be strictly mated to a 6-speed dual-clutch transmission.

The 2020 Volkswagen Atlas Cross Sport will arrive in the United States in the third quarter of this year. Pricing hasn’t been revealed yet, so stay tuned for updates.