Even though it’s still pretty far away from dealerships, the 2019 Acura RDX crossover has decided to show pretty much everything. The pre-production prototype has been spotted a few hours ago while it what checking out its new abilities. The luxurious high-riding vehicle is almost without camouflage, so it’s not too hard to conclude what to expect from it. Although it’s not quite clear what Honda’s premium department plans to offer under the hood.

Judging by the latest reports, the crossover will likely use a 2.0-liter turbocharged engine. The carmaker did not say anything regarding the output of the turbo mill except it’s going to deliver more power from the outgoing 3.5-liter V6 unit. Meaning, you can expect over 300 horsepower and almost 300 lb-ft of torque. The power will be sent to all four wheels via a 10-speed automatic transmission. More precisely, the SUV will get Acura’s Super Handling All-Wheel Drive (SH-AWD) torque-vectoring rear differential and a range of driving modes: Snow, Comfort, Sport, and Sport+. 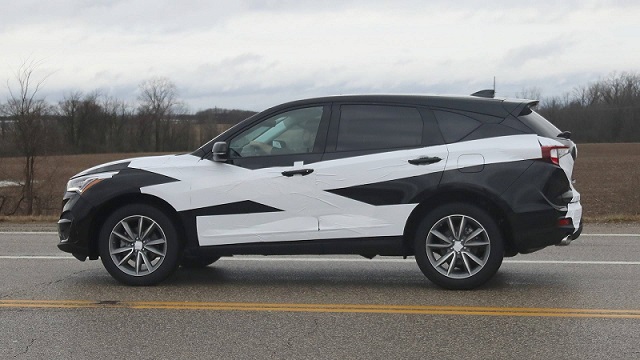 The 2019 RDX shows pretty much everything that we expected. There is a diamond pentagon grille in the very center of the front end and a pair of “jewel eye” headlights. There are LED daytime lights and a large air vent below. The new roof looks more sloped than before thanks to the more aggressive B-pillar, while the rear hatch sports pretty handsome taillights. The rear bumper seems to be larger and lower than before, while the crossover uses a pair of exhaust pipes.

We have no interior shots at the moment, though it is very likely to see the 2019 Acura RDX with dual analog gauges and a 10.2-inch touchscreen with an Android-based operating system. The system is paired with Acura True Touchpad Interface. The passengers will definitely get more room inside thanks to the additional 1.2-inches in width and 2.5-inches in length. Still, this is not going to have a bad influence on crossover’s curb weight. Moreover, the new-gen RDX will be a bit lighter because it’s riding on a new Acura-exclusive architecture.